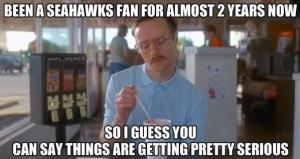 I mentioned after the Championship Games a couple weeks ago that I would be boycotting the Super Bowl, and also Fuck Tom Brady and Fuck the Patriots. While the latter part still and forever hold true, I’ve had to reconsider my position on the Seahawks after the following developments:

1. Marshawn “BEAST MODE” Lynch brilliantly tells the media, his “boss”, judgmental voyeuristic douchebags, and white people everywhere to go fuck themselves in one cleverly executed move that should be admired and revered by all.

2. Richard “You Can’t Tell Me NOTHIN'” Sherman has been so deliberately composed, pleasant, and even soft-spoken in his interactions with reporters and talking heads that I can’t help but assume an undercurrent of rage, hostility, and athletically-directed aggression is broiling beneath the surface, building in pressure and intensity, waiting to be unleashed on whoever happens to be standing near him once he reaches critical mass. Hopefully it’s Tom Brady. I seriously feel like the chance to see someone butchered and cannibalistically consumed on national television has never been higher.

3. I realized my reasons for hating the Seahawks were mostly shallow, vindictive, and pointless. Other than those times they came in and mercilessly gang-raped my boys from NOLA right before my terrified, innocent eyes. Also, I DO WHAT I WANT. 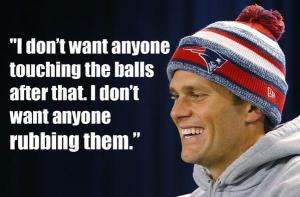 I also remembered how much of a man-crush I obviously have on Richard Sherman. I can’t imagine why. I mean, who else do we know who is too intelligent for his own good, is passionate about his gifts and “calling”, gets bored and easily irritated with willful ignorance and stupidity, does not suffer fools lightly, sometimes gets caught up in his own emotions, has an angry streak, and is generally misunderstood by those who would judge him? Hmm…

Anyways, my point is, I’m back in for Super Bowl XLIX (that’s 49 for us simple folk)! Who am I rooting for? I’m rooting for a wildling scourge to come storming through the New England stronghold in the tailgater parking lot, raping and pillaging their way to the stadium where they will charge the field, capture Brady, lash him to a make-shift rack and proceed to flay him alive before kidnapping Gisele and disappearing into the Phoenix metropolis wasteland.

6 thoughts on “Super Bowl 49 Because F*ck Your Fascist Numbers, Romans!” 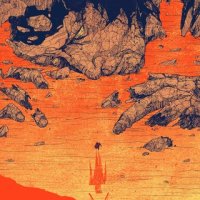